Colin had a rough night with not a lot of sleep. Jet lag is tough!

We headed down to the mall, met up with G&B who were staying at the same hotel as us, had some Gregg’s and took care of some money stuff. We loved the location we picked to stay at. Stratford is well-connected transportation-wise and having the mall and shops close is so helpful.

Greggs for the Win!

Our first stop was the Emirates Air Cable Car. Only a few pounds and we got to go on a cable car over the Thames. We had great views and it was a fun ride. 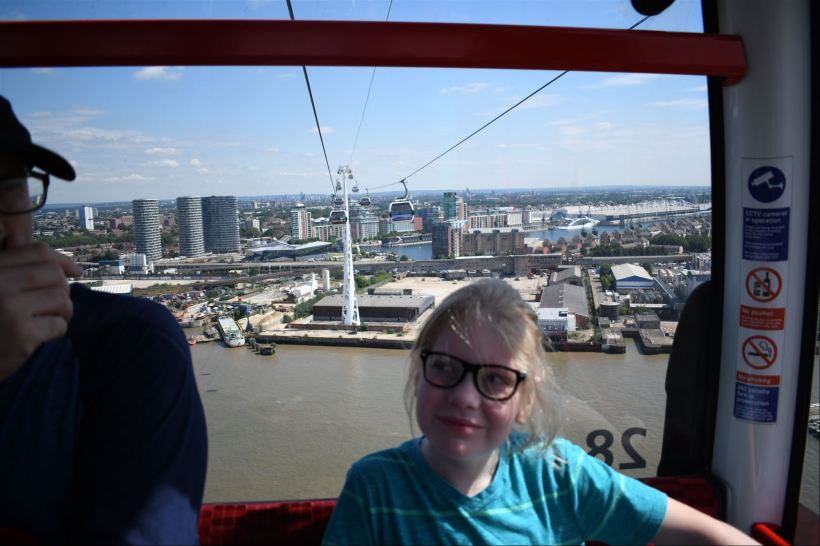 View from the Cable Car 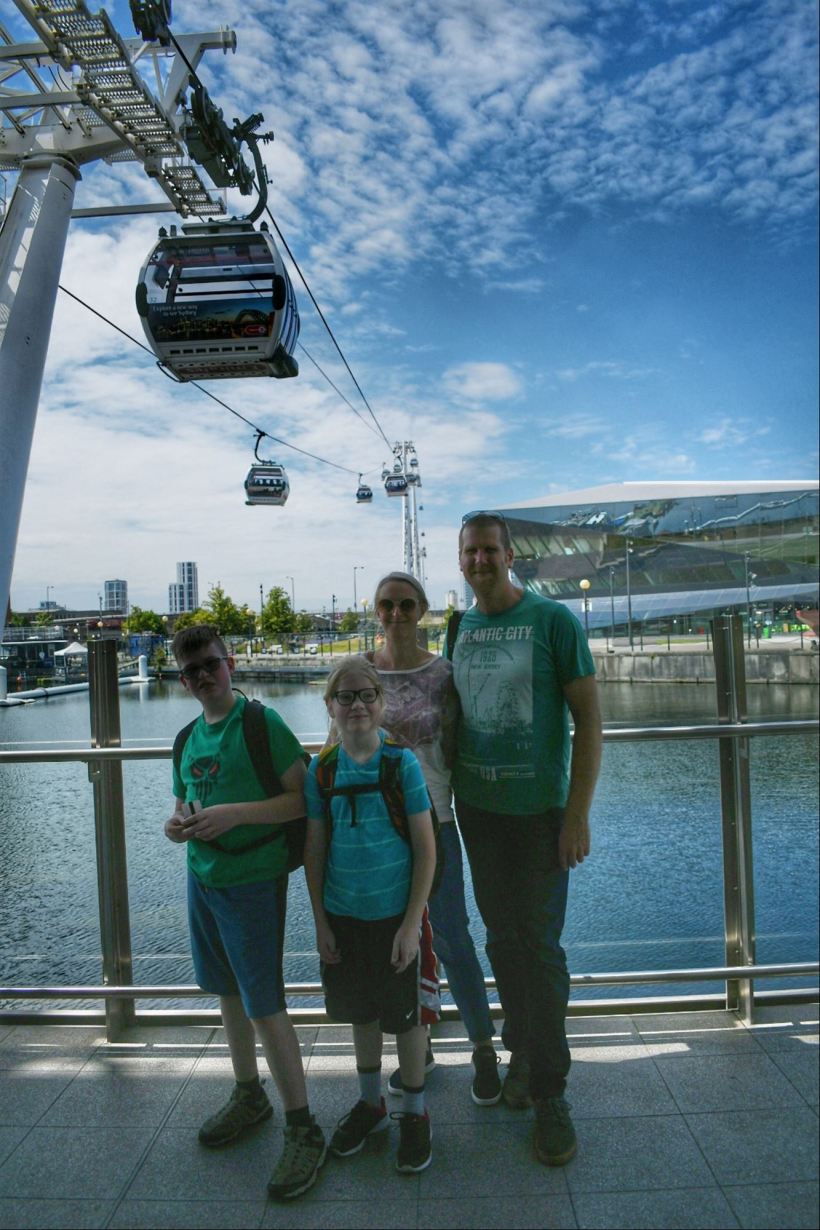 After that we walked to Canning Town station and took the DLR to Island Gardens. We walked under the Thames through the Greenwich Foot Tunnel. So many memories! I think it’s a fun way to cross the river. 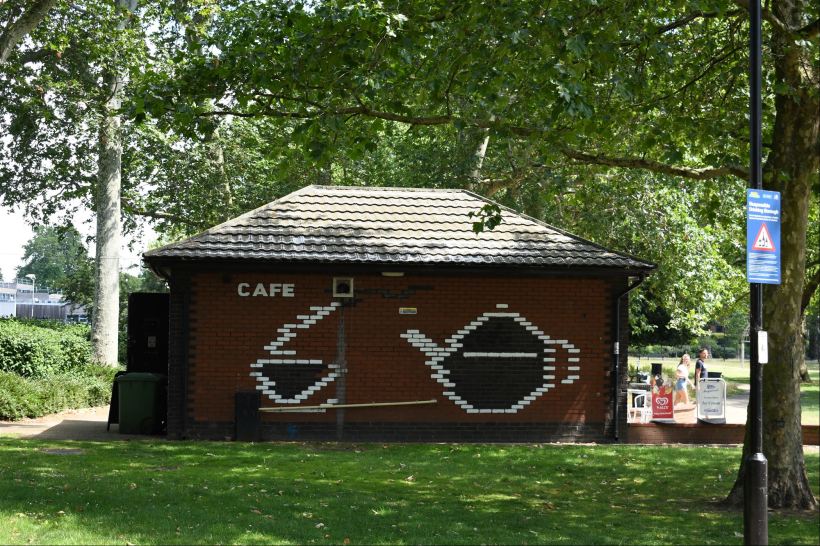 Heading down into the Tunnel to walk underneath the Thames to the other side. 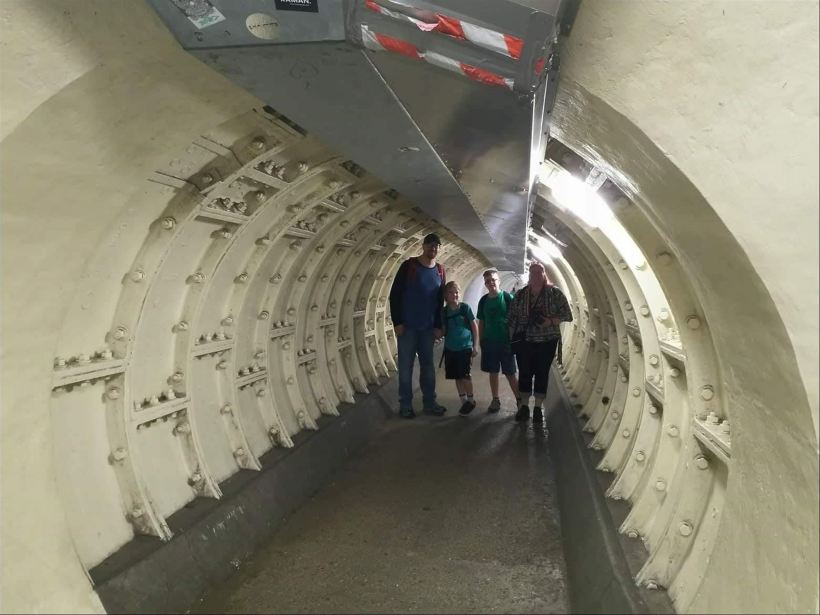 When we got to Greenwich, we went to the Noodle House we used to go to and had a great lunch. Noodles, of course, and Jude got a big bowl of ramen. It was all super tasty and everyone was very satisfied. 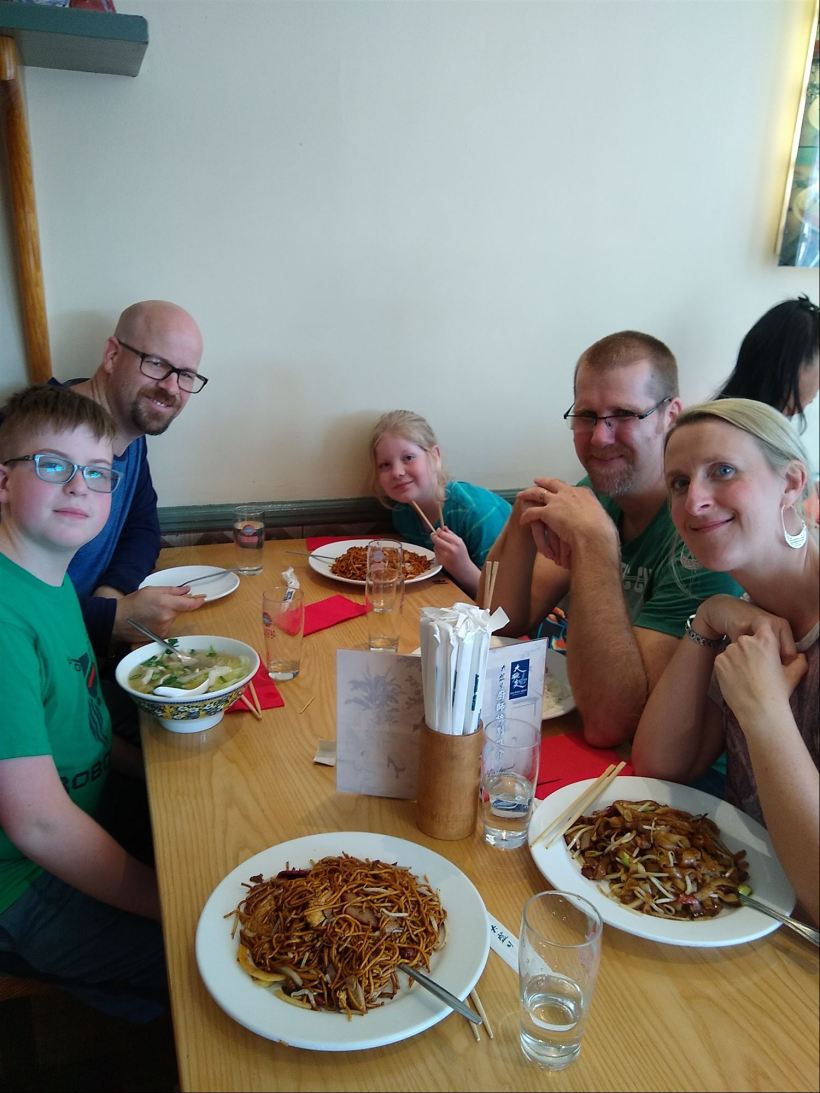 The noodles were as good as we remember!

We wandered through the market after refilling our water bottles at a local store that refills them. This was an interesting thing for us – finding places to refill water throughout the day and finding toilets! Also, the boys did not like London water! We are a bit spoiled here in Bend with our lovely mountain river water. London water doesn’t taste super good. The boys almost wouldn’t drink it at all, but within a day or so they had adjusted and were drinking plenty. I love the Greenwich Market – lots of vintage stalls and interesting homemade items. It was here that we had our first experience of losing one of the boys while in London. It wouldn’t be the last. Eeeek! Becky bought some lemon drops and lemon sherbet candies at an old fashions candy store – these sustained us at many times throughout the next week!

We headed to Greenwich Park – it’s a lovely park with lots of space and trees and hills and, it turns out, art. We found a Henry Moore sculpture while taking the scenic route to the Observatory. The Observatory was crowded and the actual Prime Meridian Line was not accessible due to work being done, but I love that hill and the view of London and the buildings at the base of the hill.

The Union Jack atop the Greenwich Observatory. 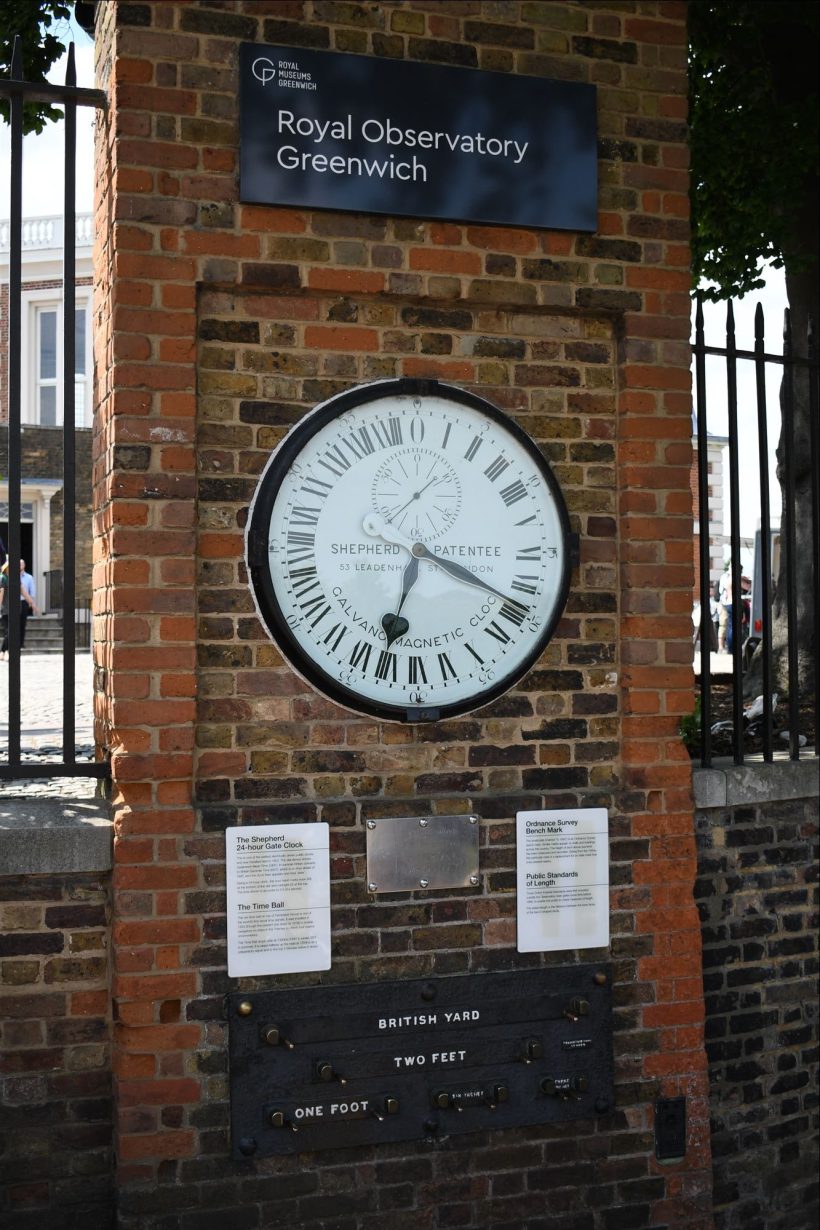 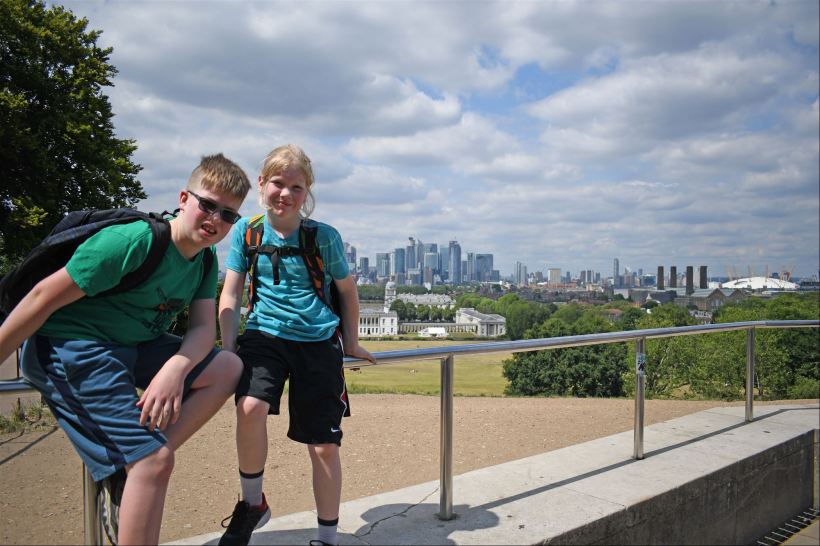 We wandered down the hill to the collonades between the Maritime Museum and Queen’s House. It was a hot and sunny day so it was lovely to take some time to sit on the benches in the shade and rest and chat. Zane wanted to do a bunch of running – go figure. Colin, on the other hand, was struggling from his lack of sleep the night before.

The Blacketts in the Colonnade

Resting in the breezy colonnade. 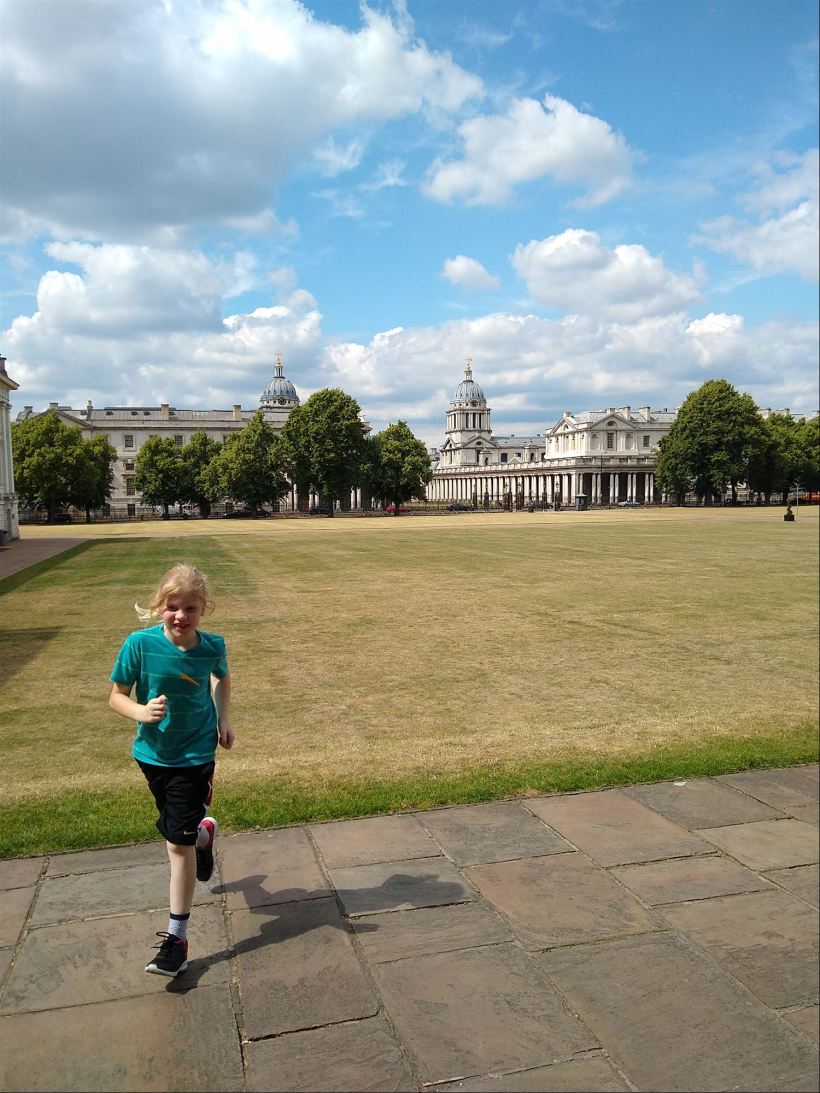 Where does he get his energy?

We carried on and decided to check out the National Maritime Museum. It wasn’t on the plan, but we went in on a whim and it turned out to be a great museum. There was all sorts of ship stuff. The figureheads and ship badges were especially fun. 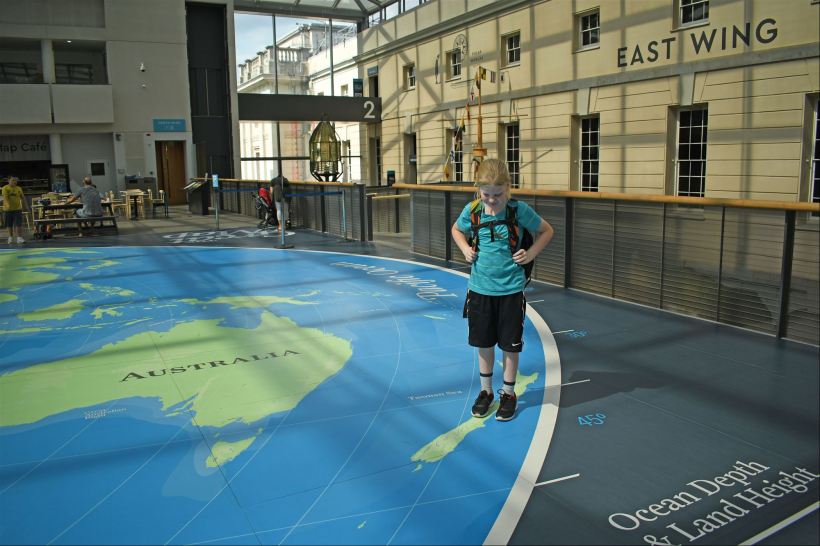 Mastheads – Note the Sylvester Stallone masthead in the top right corner. Most of the female mastheads seem to be having wardrobe malfunctions. 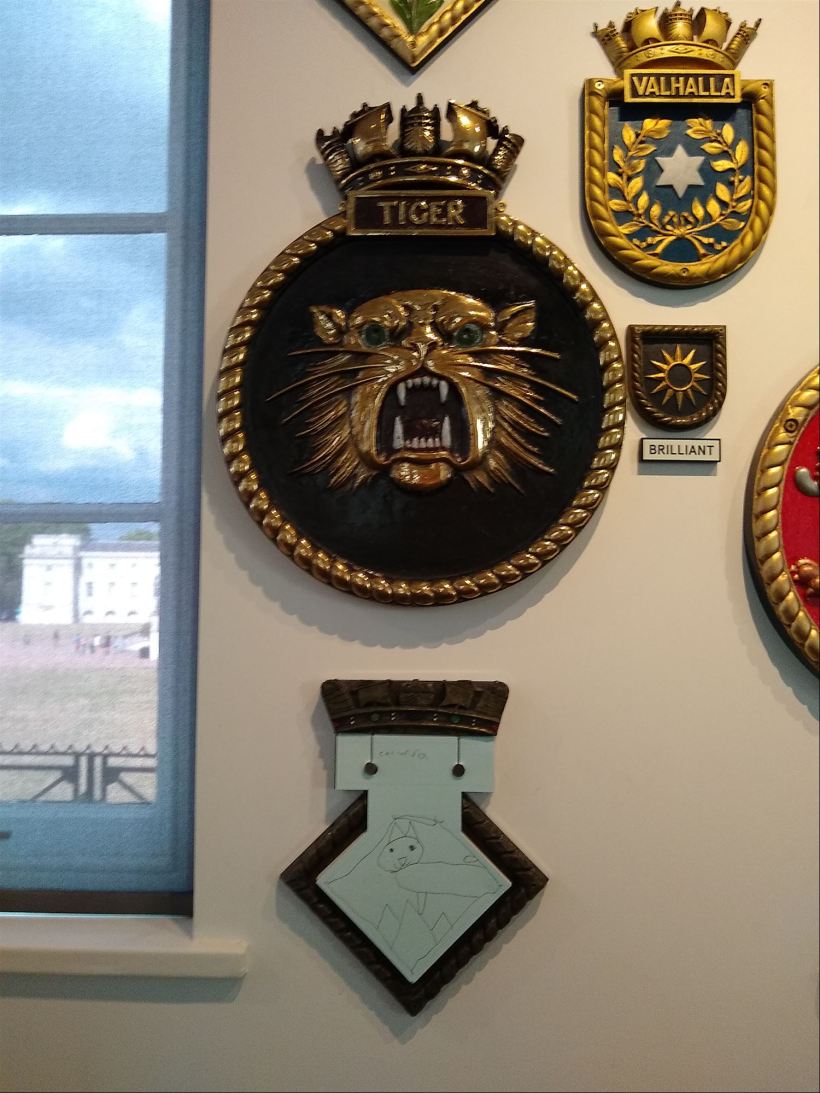 Ship Badges, the Boys got create their own, there were cats involved. 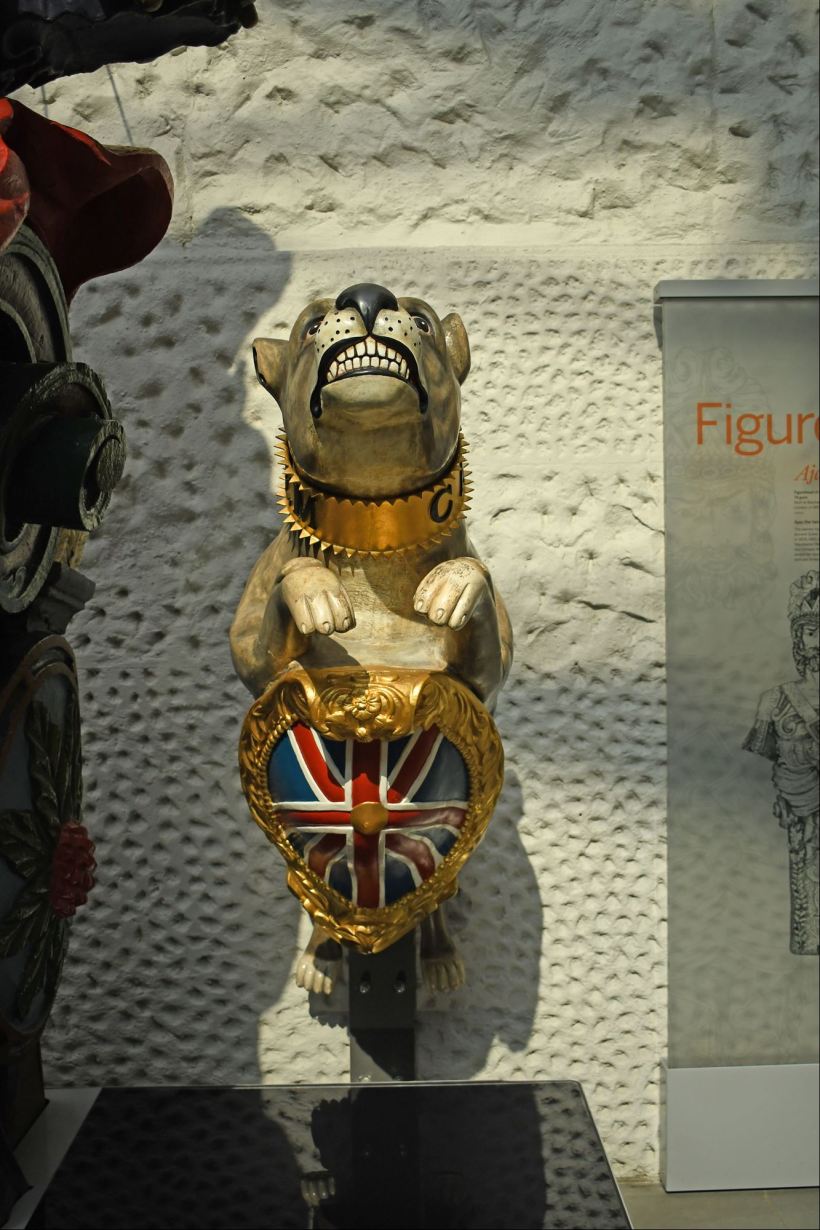 We left in search of a fast food joint to have a cold drink and a rest for Colin. We walked past the Naval College on the way – amazing buildings. 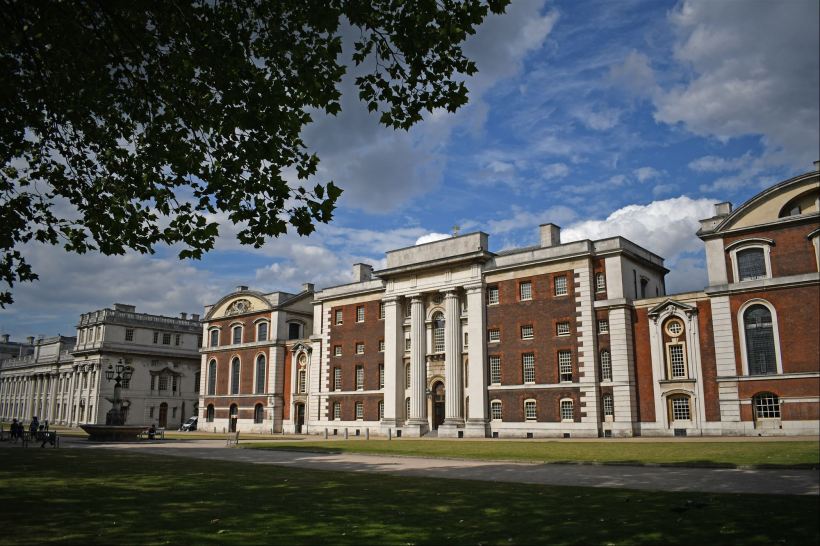 Colin revived enough for us to go to Canary Wharf in search of the Traffic Light Tree. After a bit of a walk, we found it. Sadly, the lights weren’t working, but it was fun to see it. I love going through different areas of London – Canary Wharf is very business and posh.

Testing his balance skills on the DLR 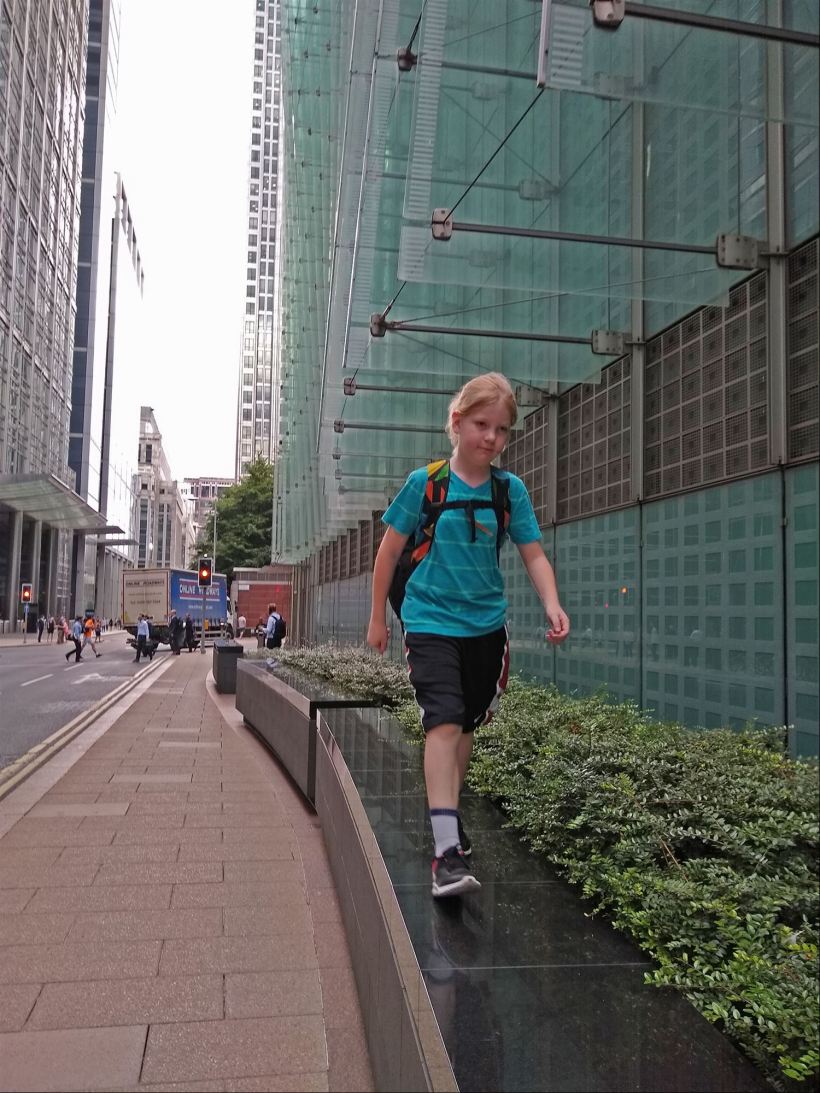 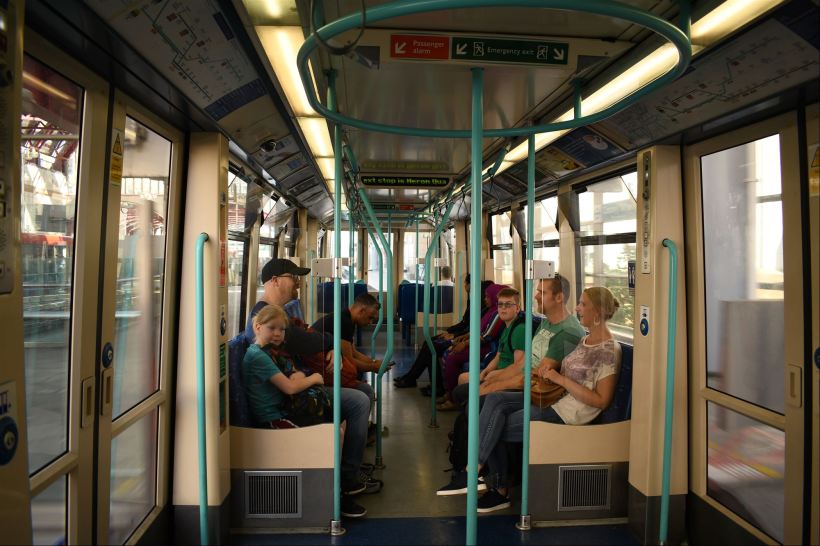 We got a bus to take us back to Stratford, it was the boys first double decker bus. It was great to see some of the Isle of Dogs – I lived there for over a year. The bus took us through more of the true East End neighborhoods. It was good to see more of what we were used to. 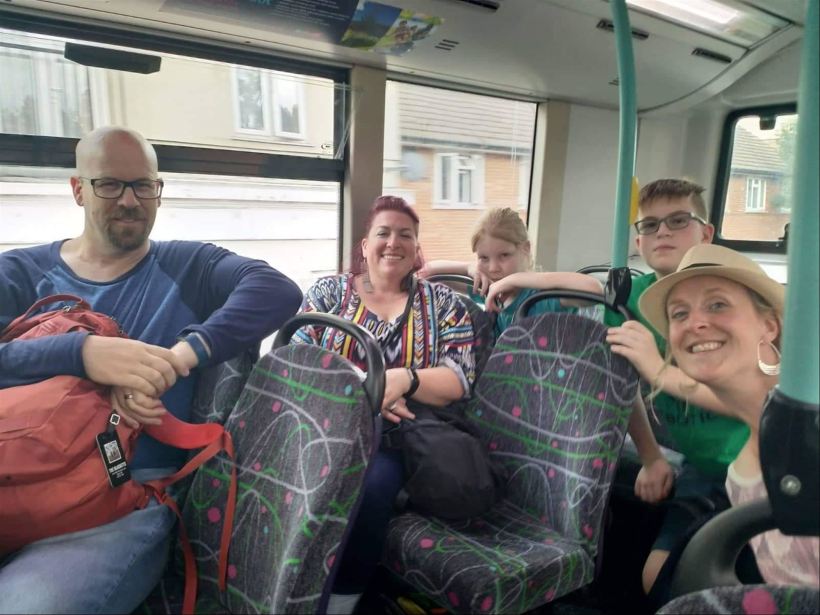 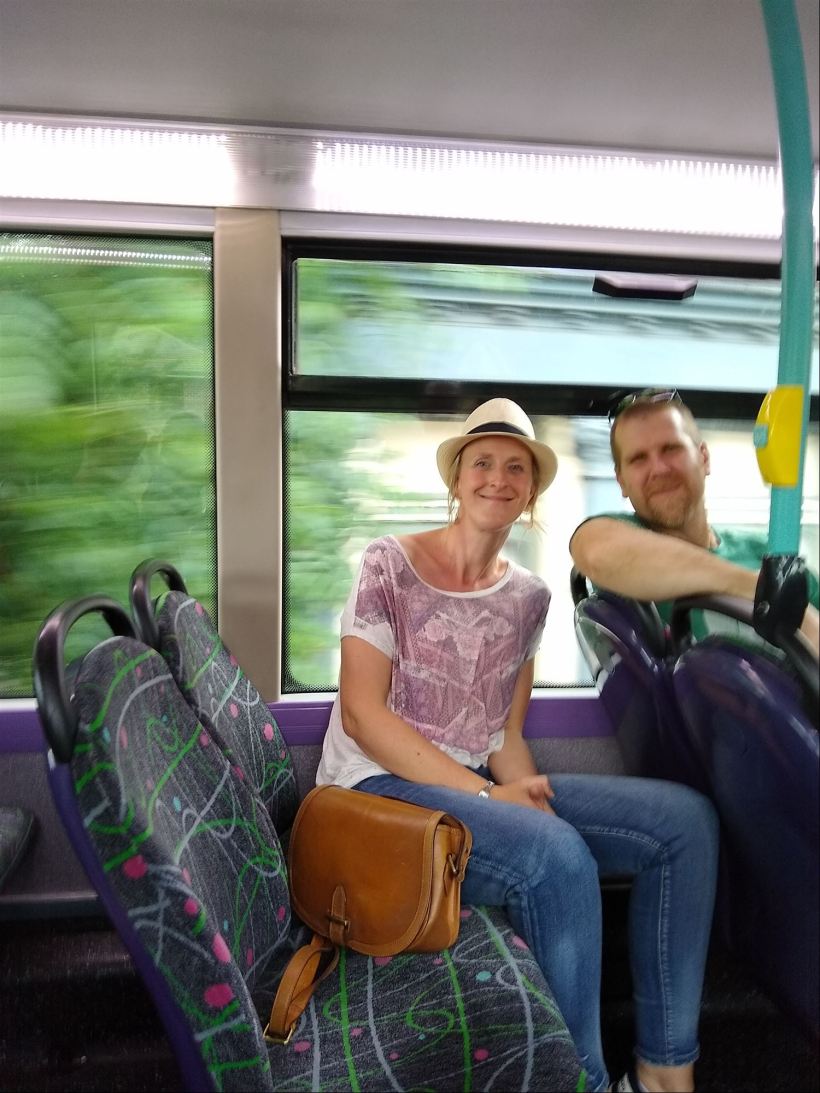 When we got to Stratford, Colin took the boys back to the hotel and G&B introduced me to Lidl which is an amazing supermarket – super cheap! I got stuff for us to have a little picnic in our room. Colin headed to bed and I took the boys down to the playground outside the hotel which conveniently has a pub right next to it with outdoor seating. I sat with a drink, writing in our journal while the boys played. I have to say, that little playground (and the pub next to it) were a regular fixture in our lives and so good for the boys. They created a workout course that they did repeatedly (they were not playing, they were working out). They interacted with kids from all over the world and it made me so happy. 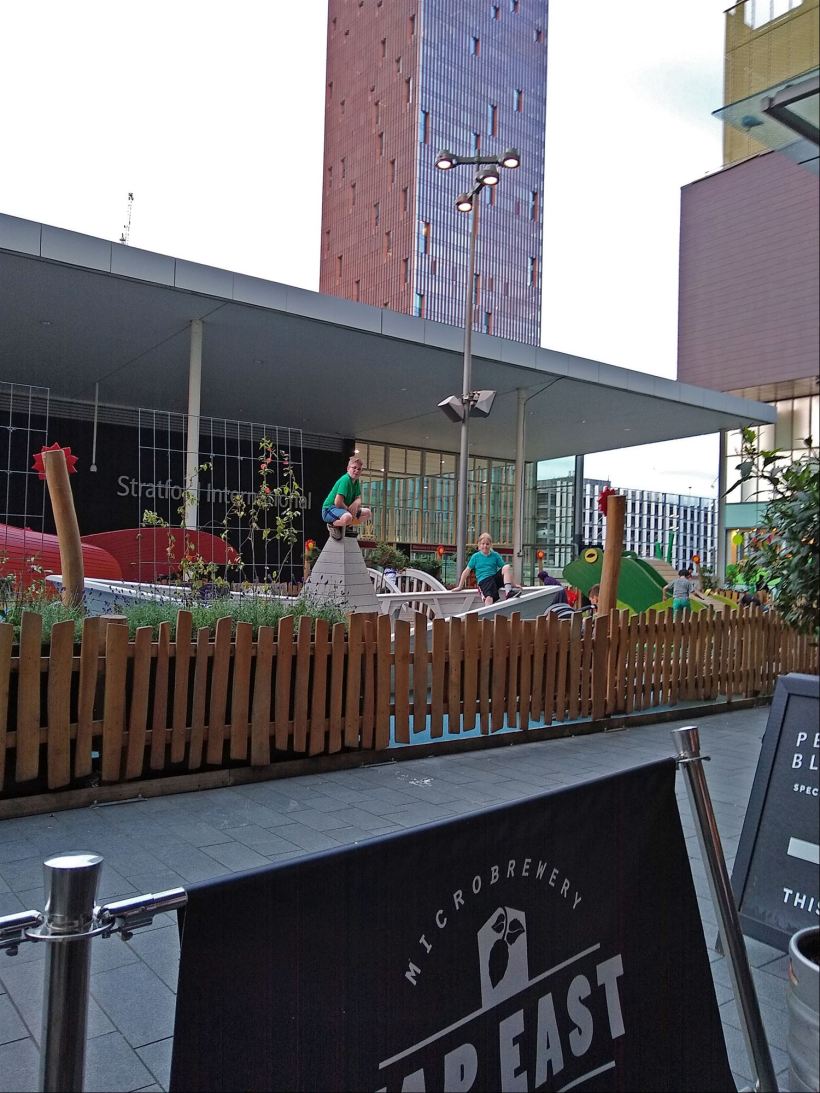 Playground/Pub Combo is a great idea!

Middle of the night thoughts (it’s my turn to have a rough night):

I still love London. I was worried that I wouldn’t feel the same about it anymore.

I love that there is the unexpected all around. I don’t “love” the smell and the grime, but at the same time, it wouldn’t be London without it.

I love the ancient and ornate buildings and the modern, innovative architecture and the random 60s and 70s ugliness thrown in.

I love the public transportation system in London. I think it’s the best in the world. The Underground, the buses, the Docklands Light Rail, the trains – connectedness and ease of use. I love that each line on the Tube has its own personality and quirks.

I love that I still know it. 20 years later and I would still feel confident wandering around town on my own.

I love that I can be walking with the crowds towards Trafalgar Square and know that if I wanted, I could turn right and walk up stairs into the National Gallery and be in front of The Execution of Lady Jane or a Van Gogh in a few minutes.

I love that this city continues to change and evolve and grow and yet there are things that are unchanging and constant.

I love that the Evening Standard is still free. I love that people leave newspapers on the Underground for other people to read.

I love the escalators and poems on the underground and the advertisements on trains and in stations. I love the breeze in an underground platform when a train is approaching. I love that they still say “Mind the Gap”.

I love that we saw a rat by the spot we got engaged. I love the Thames and walking over, under and beside it.

I love the cheap and the posh. I love the ache in my feet and legs from all the walking that is a part of life in London.

I love the overwhelming amount of choices when it comes to food. The smells and flavours, the old favourites and new options, all the international possibilities. I love the choices on the supermarket shelves. The mix of British and foreign.

I imagined, though I didn’t know for sure, that at the end of two weeks I’ll be ready for home, but that might be more to do with comfort and convenience. There were certainly things that I already missed and appreciated about Bend. Clean, fresh tasting water from the tap, availability of water and toilets. The fresh air and mountains and forests. Getting around quickly.

But I needed not have feared that my love of London had died. It was strong and sure.

The boys were doing so well. Good attitudes in the face of a physically demanding schedule, constant change and new things.