Waking up was a bit rough after my lack of sleep, but I was excited for this day! We were heading to Oxford which was a bit of a pilgrimage for me. Visiting CS Lewis’ home was something of a dream. CS Lewis has played a big part in how I view the world. The Chronicles of Narnia have particularly shaped my view of God and faith and some of my greatest heroes happen to be a Talking Mouse and a Marshwiggle because of his stories. I also love the Cosmic Trilogy and many of the books he wrote about faith as well as his poetry and letters that he exchanged with various people. Jude’s middle name is Lewis for a reason and I have two Narnia-themed tattoos. It’s kind of a big deal to me.

We headed off to Paddington Station. As we were getting closer, it looked like time was running out to catch our train. At one station, the doors were closing on the carriage and I physically held the doors open while the boys got on. A definite no-no, but I was impressed with my strength! I have Ally at BodyRock to thank for that!

We made it to Paddington with a couple of minutes to spare so decided to get some breakfast at McDonalds, waiting for the hashbrowns to cook almost made us miss the train! Should have gotten up earlier and eaten at Gregg’s!

We had a lovely train ride to Oxford. I love trains. You have freedom to move around and do stuff and I don’t get sick!

When we got to Oxford, we walked into the city center. We went through the covered market, past the Bodleian, and under the Bridge of Sighs. I kept expecting Inspectors Morse or Lewis to appear, though that would mean that someone had been murdered! It was quite crowded, but Oxford is beautiful. 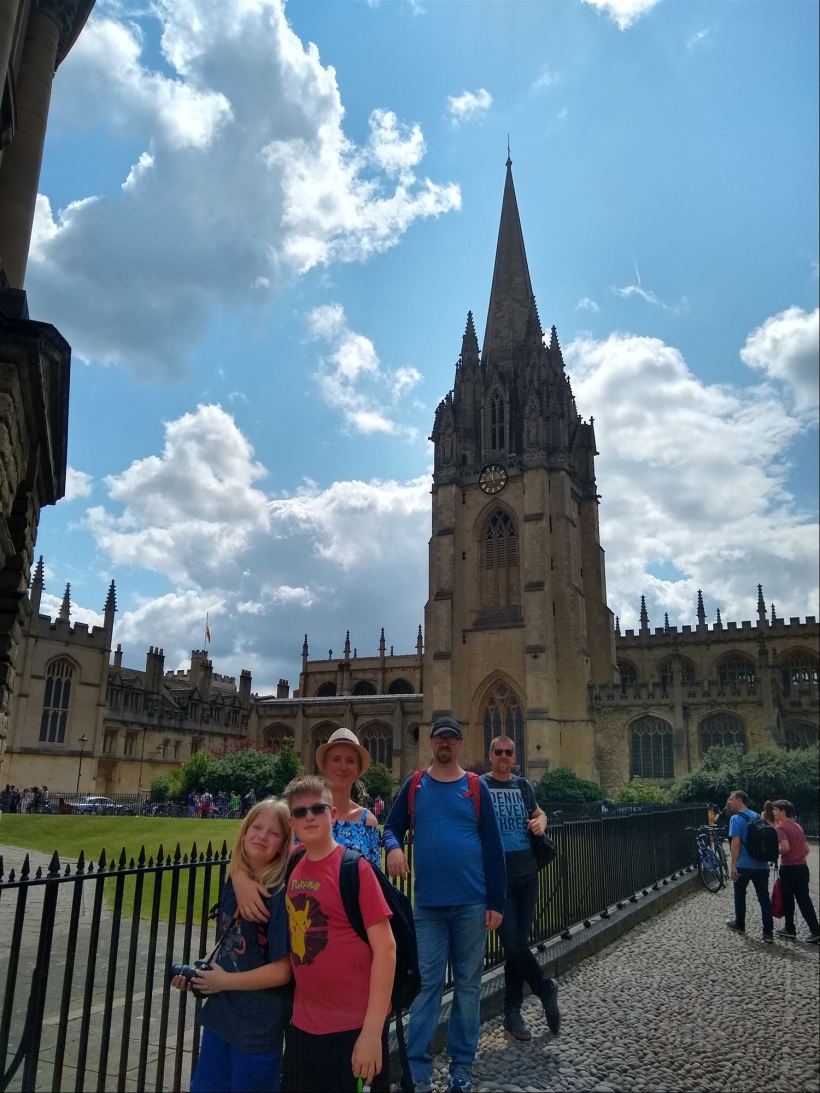 The Spires of Oxford 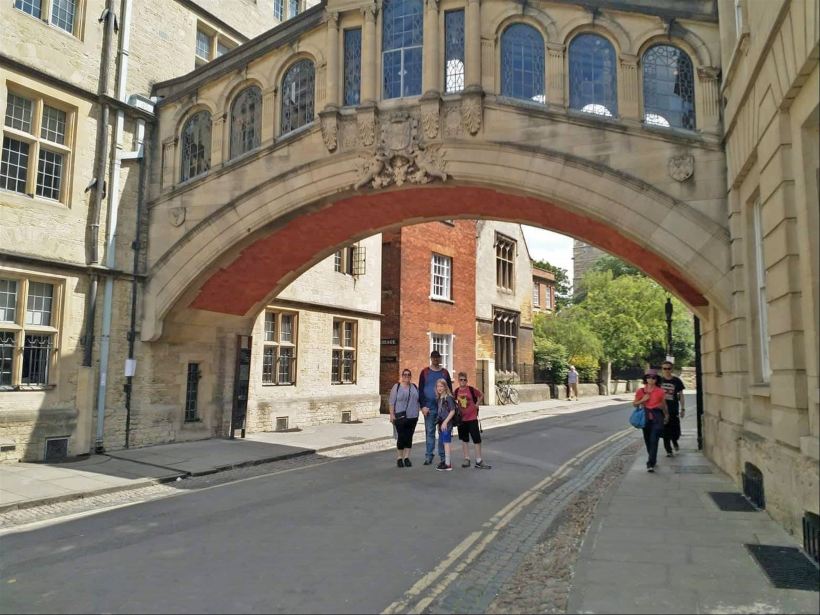 The Bridge of Sighs.

In front of the Bodleian.

The back streets of Oxford are lovely. 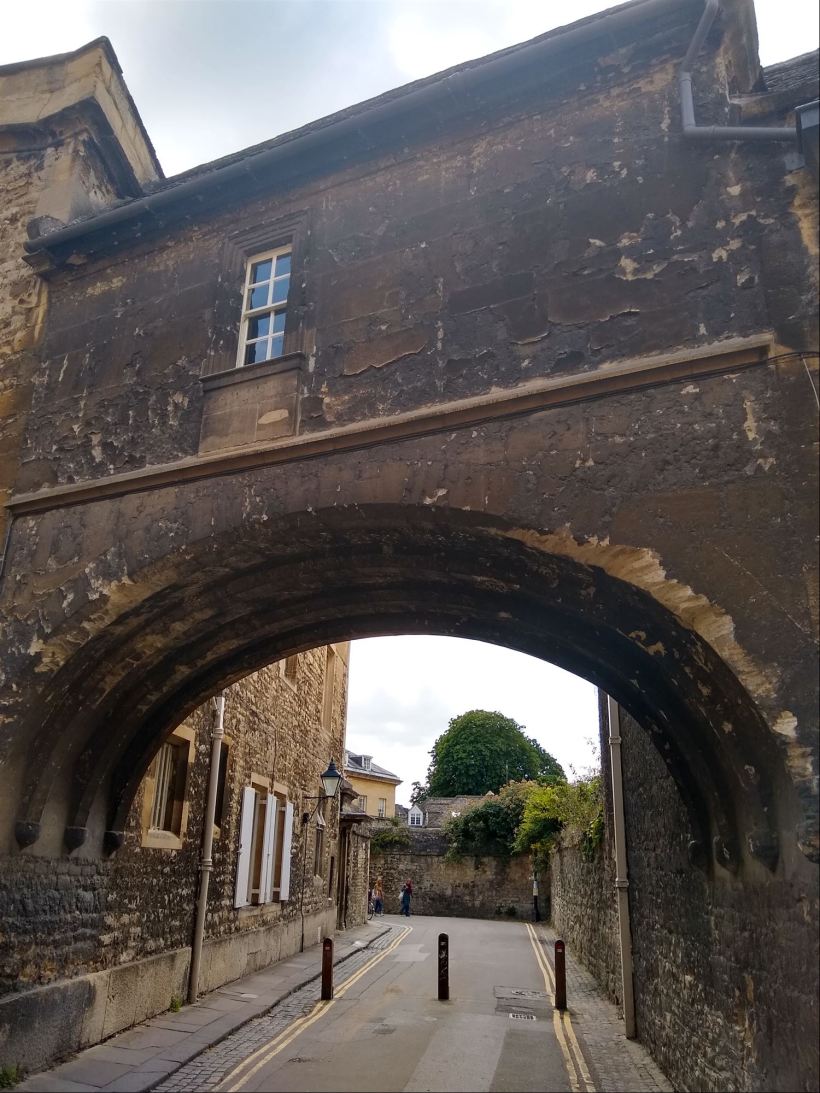 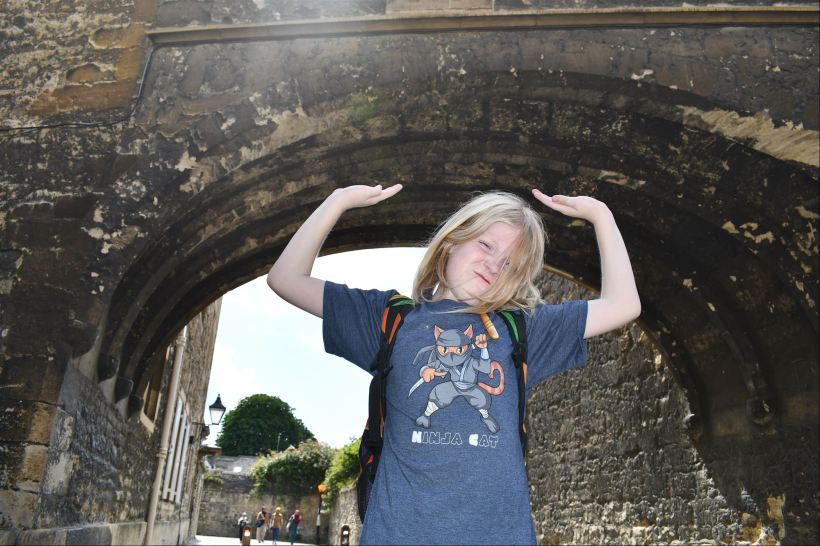 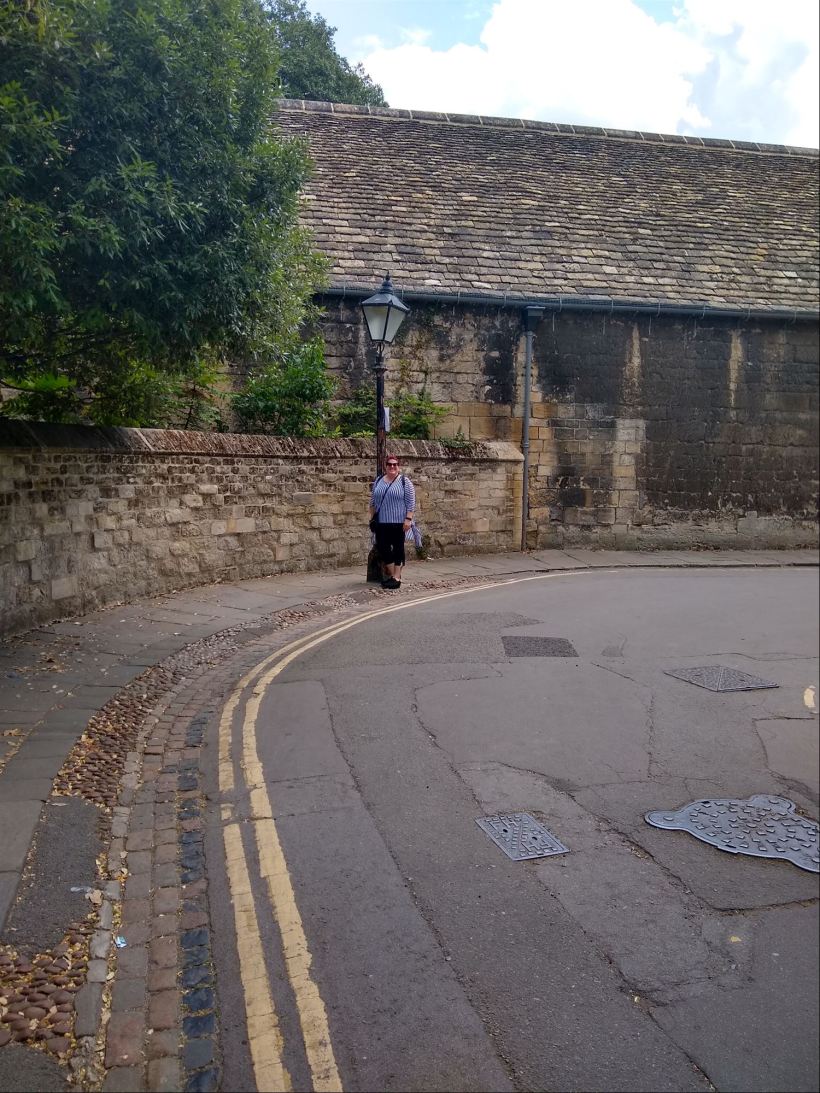 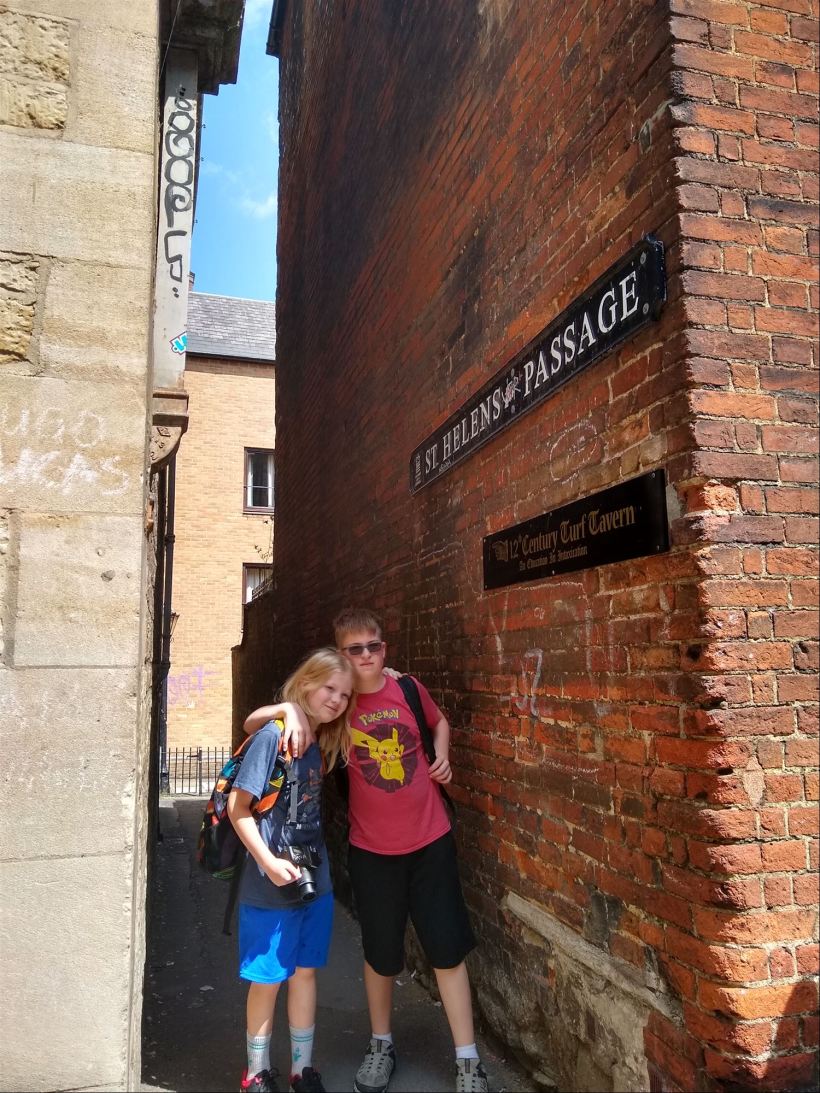 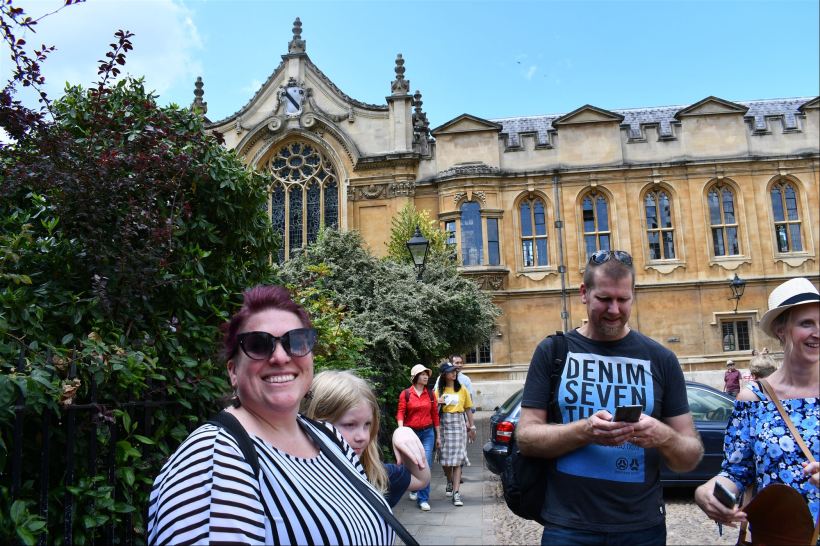 Zane in front of the Bodleian. I let the boys be photographers sometimes and they got some cool shots.

We walked past several of the colleges and found Magdalen College where CS Lewis taught. 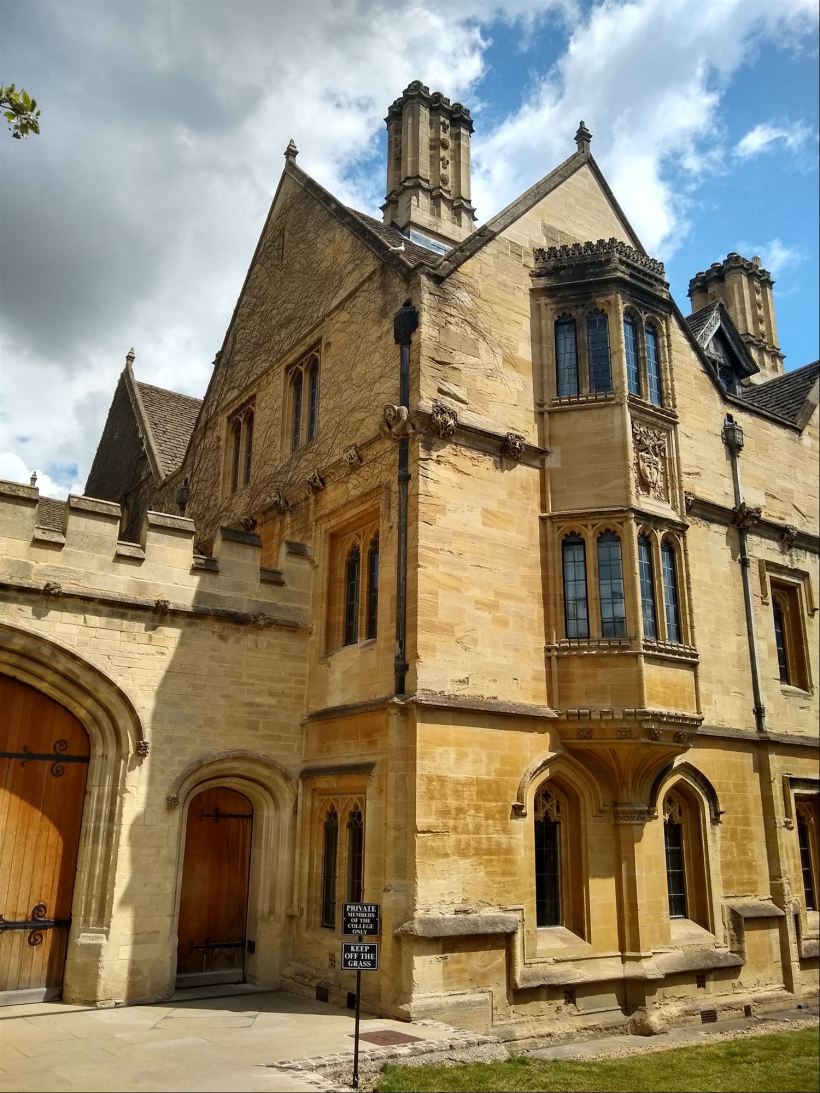 We grabbed some sandwiches and jumped on the bus to CS Lewis’ house. We got off in a very suburban area with detached and semi-detached houses from the 70s and 80s. Not at all what we were expecting and we were getting a bit worried. I love all the different lampposts in London and Oxford, but we found the least Narnian lamppost of all time on CS Lewis’ street. We came to the Kilns and need not have worried at all. It is a lovely old cottage with an amazing garden and attached nature preserve. 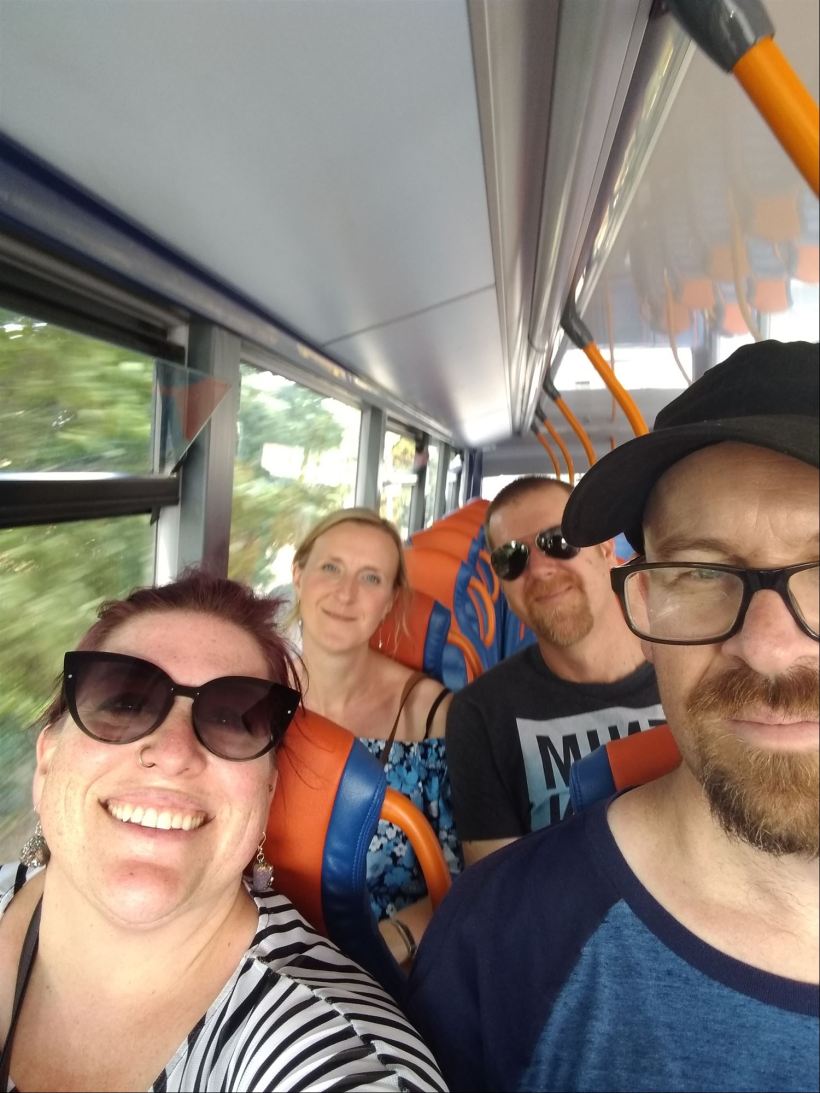 The least Narnian lamppost in all the world is on Lewis Close. 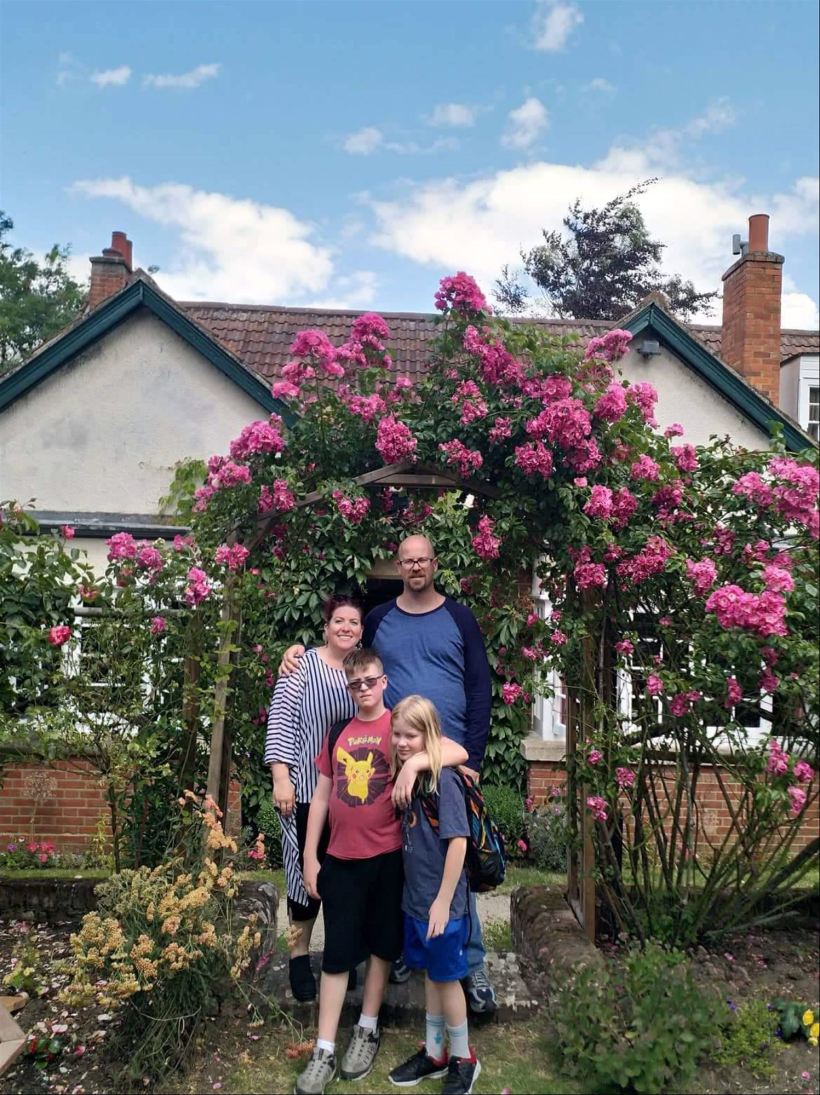 In the Kiln’s Garden

We had a great tour guide. It was wonderful to hear the history of the house and learn more about Jack, his brother, his wife and the other members of the household. It seems he was a jovial and lovely man with foibles and quirks and they had a very interesting domestic life. He was also incredibly frugal which impressed Colin! I really liked that they didn’t deify CS Lewis or sugar coat his humanity. We saw a photo and learned about The Kilns gardener, Fred Paxford, who Lewis said was the inspiration for Puddleglum and my heart nearly burst! I thought I knew a lot about CS Lewis, but there is still so much to learn. So thankful to share the experience with Colin, the boys and G&B. 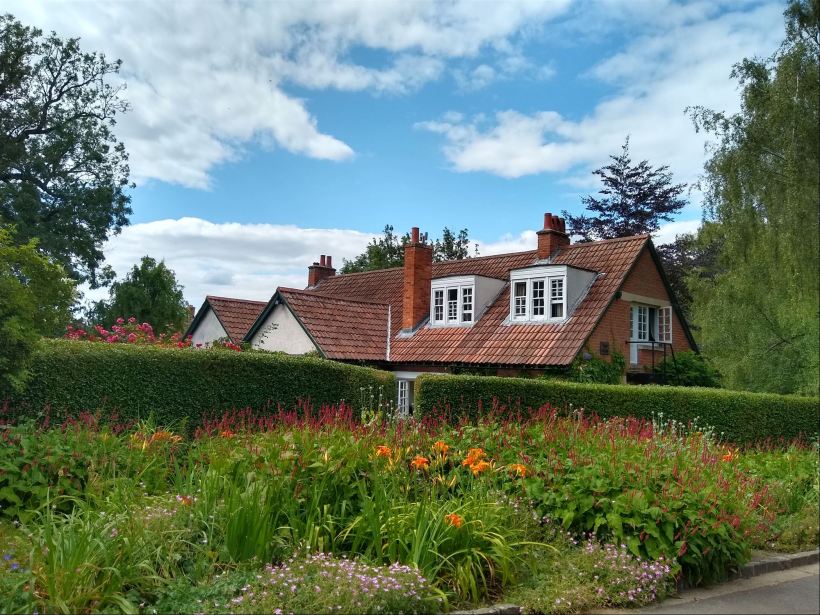 Just hanging out in CS Lewis’ Room, no biggie.

After the tour, we wandered through the Nature Reserve. It’s a beautiful wooded area that was very important to the the Lewis brothers.

Then we walked to the church Jack attended – Holy Trinity. We visited his and Warnie’s graves in the churchyard. I got to sit where he sat every week. There’s a beautiful, etched glass window about Narnia there. For some reason as we wandered through the graveyard, this inspired the boys to design their own graves and grave stones. There will be lights, electricity, moving parts. 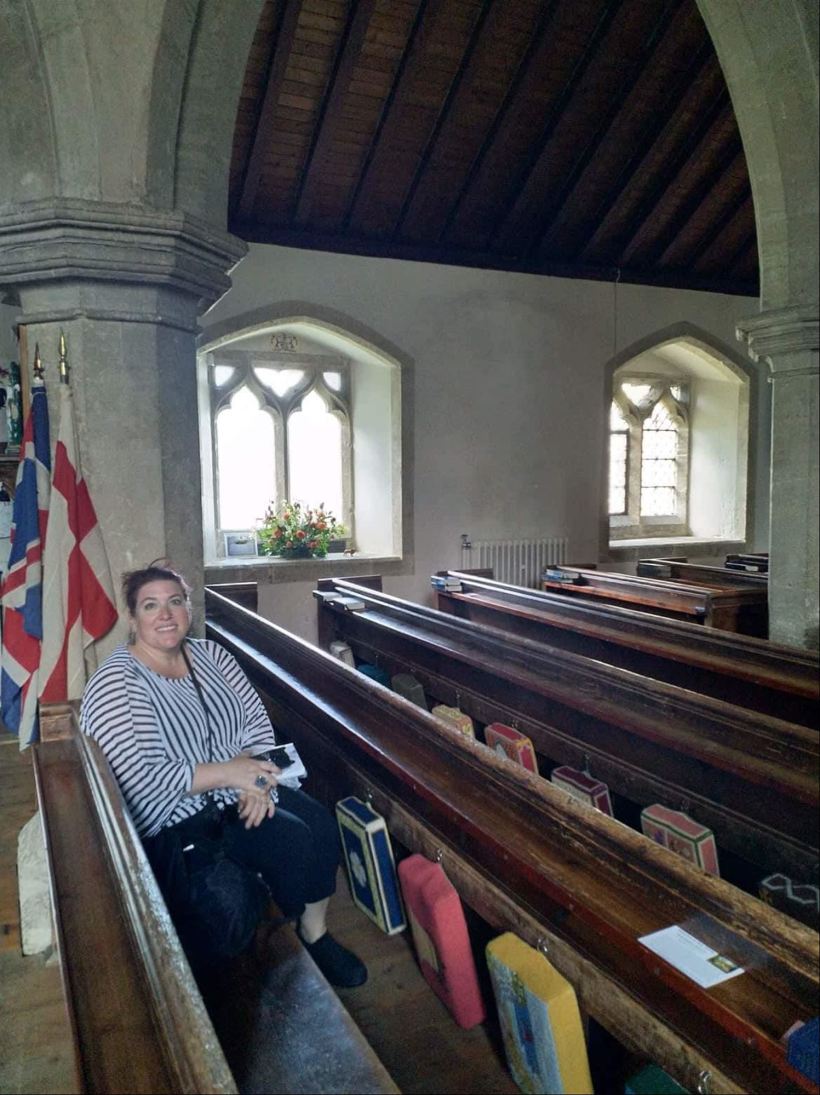 We caught a bus back to Oxford (we are not as tough as CS Lewis who walked the 3 miles from The Kilns to Magdalen College and back home everyday!). We went to the Eagle and Child and had a drink. This is the most famous pub where CS Lewis, Warnie, Tolkien, Charles Williams and many other members of The Inklings, met to discuss their writings. I ordered Colin the drink that he used to get when the rest of us had beers and ciders – half orange juice, half diet coke. It’s not bad tasting, but it sure is ugly! We raised a glass to CS Lewis.

The Eagle and Child 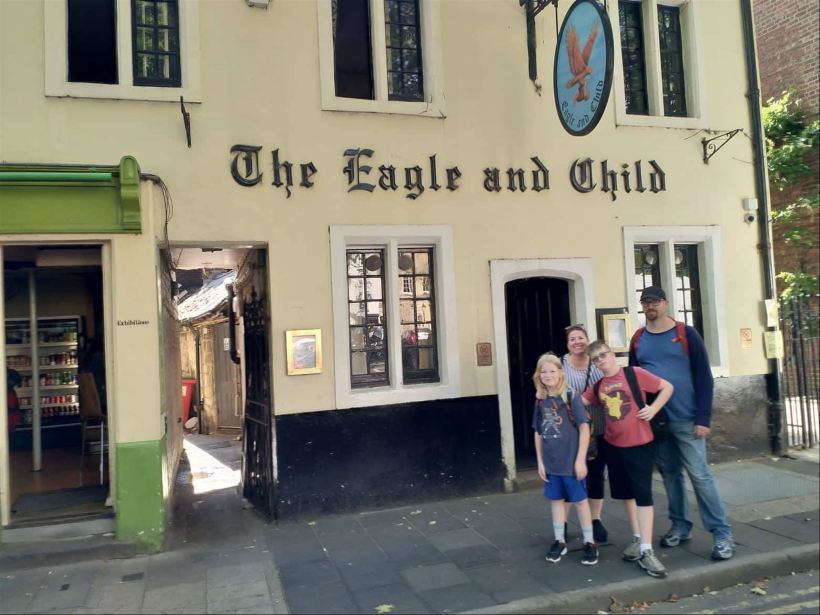 The Eagle and Child

At the Bird and Babe 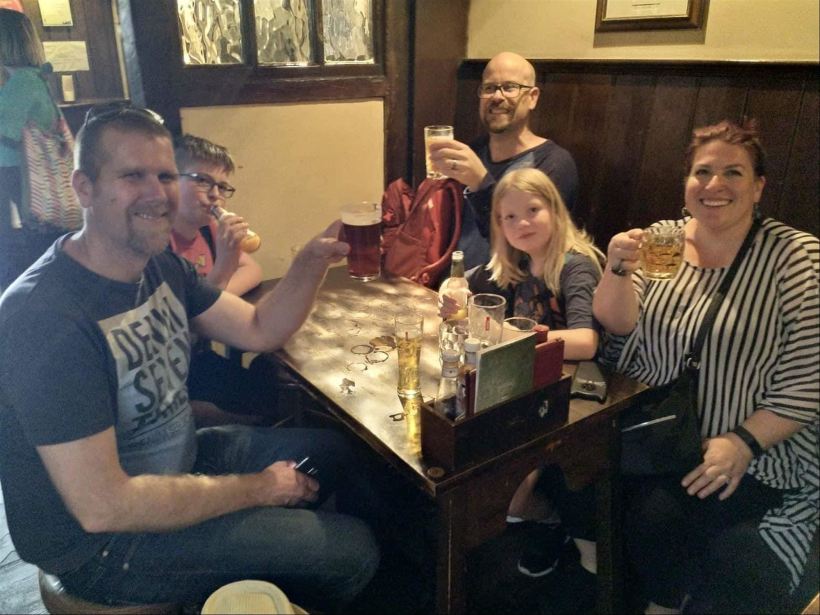 Raising a glass to friends, family and heroes.

We went in search of dinner and found a Wetherspoon pub called The Four Candles. Had a lovely dinner. Everyone was feeling a bit tired and cranky, but food helped to revive us.

There were several things in Oxford that we would have liked to do, but simply ran out of time.

Back on the train to London. Wonderful conversations with G&B about a wide-range of topics. I love these friends so much and am so thankful for what quality people they are.

Trains are the best.

At Paddington Station, we found Paddington Bear and also saw a brass band playing in the station. Then we began the journey back to Stratford. Everything takes longer than you think it will and it was nearly 10 pm when we got back to the hotel.

The Boys and Paddington Bear 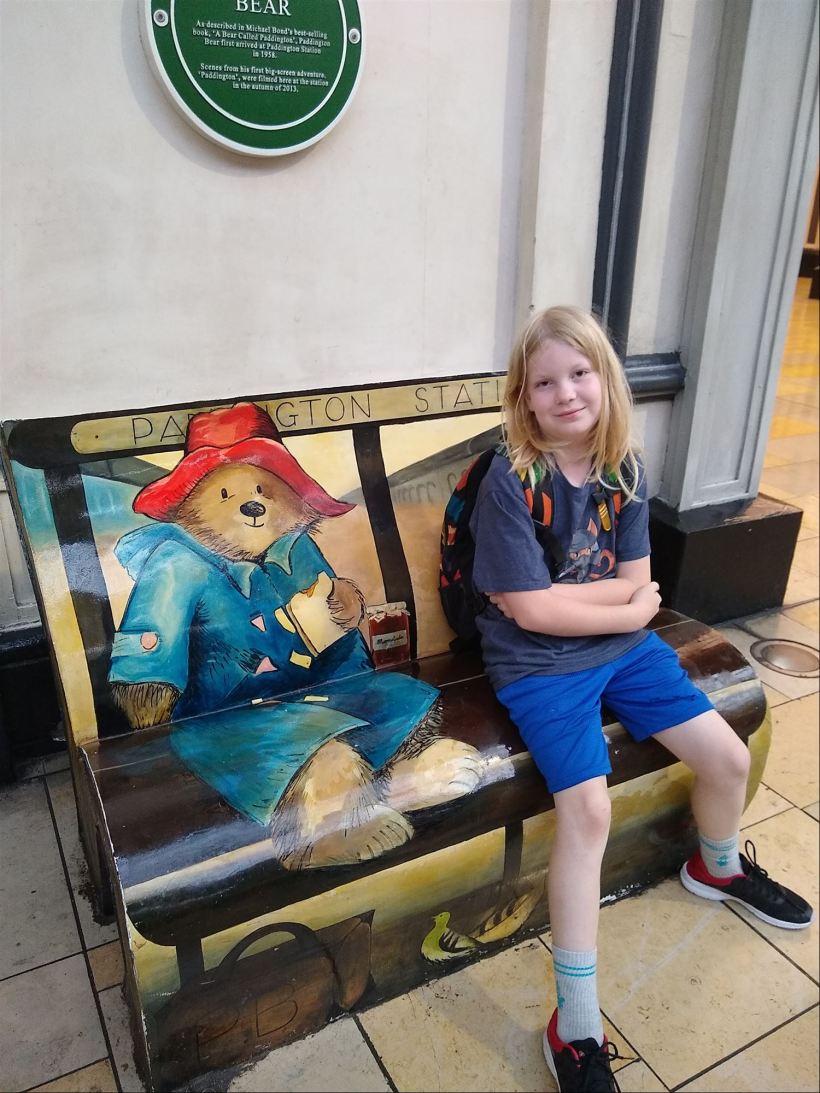